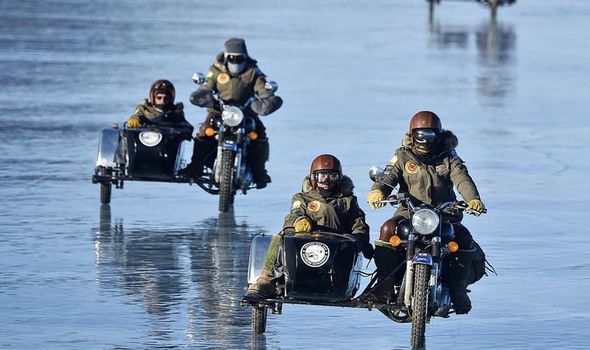 I’m sure there’s a rational explanation for all this but at the moment I can’t think what it is. At least I can explain the sparkly tights. I wore them to a fancy dress party (it’s a long story) and when I mentioned the trip to a friend, he said he always wore tights on work trips to the Arctic to stay warm. And since he was in the SAS, do feel free to question his masculinity. See you in A&E. The tights don’t have to be sparkly by the way. They were just the only ones Tesco had in my size.

On the plane from Moscow to Ulan Bator, Pete the strapping Kiwi sitting next to me, was on his way to take part in the Mongol 100 Rat Race, in which competitors walked, ran, skated or cycled across Lake Khövsgöl.

“Aha, same lake as we’ll be riding the Enfields on. See you there,” I said as the pilot announced in Mongolian that we were descending to Ulan Bator airport.

It sounded like Klingon, I thought as I emerged to meet François fromVintage Rides, the French company which organises this aptly named Frozen Ride.

Sadly, I didn’t meet my bag, which was to spend the entire week in Moscow airport. You know, the bag with all my cold weather gear and four-season sleeping bag.

Thankfully, biker camaraderie being what it is, the other riders came up with an open face helmet, spare thermals and inner gloves, a furry gilet and a balaclava.

We climbed into a minibus for 14 painful hours on the potholed road to Moron, through a bleak, rolling landscape.

By the time we finally got there late that night, I was suitably moronic, having not slept for 32 hours. 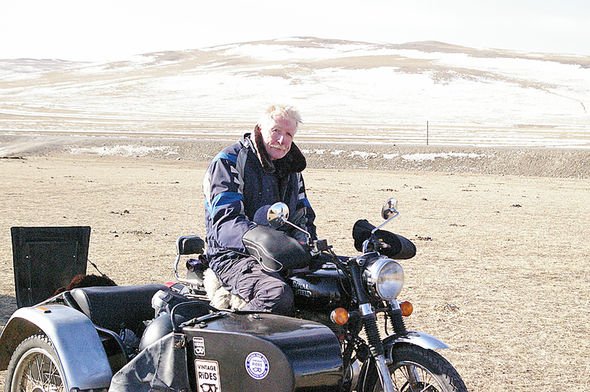 Next morning, we were introduced to the bikes for an easy 60 miles on road to a lakeside log cabin, where the mechanics fitted studded tyres and we went down to the annual three-day Khövsgöl Ice Festival.

Hundreds of locals tucked into barbecues, admired ice sculptures, slid down ice slides, skated to and fro, took horse-drawn sleigh rides across the ice or practised sliding their right-hand drive Toyota Prius Japanese imports, the apparent vehicle of choice for Mongolians who have graduated from a horse.

The lake fishing fleet of rusty trawlers was frozen in for the winter nearby and I wondered where the fish were. Presumably they all went on holiday to the Mediterranean, sending back postcards saying come on down, the water’s lovely. Back at the ranch, Amara, the woman of the house, produced a dinner of chewy mutton and rice, washed down by beer and vodka, while her husband wandered around beaming aimlessly at everyone.

Mind you, women have ruled the roost here since Genghis Khan, disappointed with his useless sons, handed large parts of his empire to his daughters instead.

We slept on the floor around a stove. A wolf howled outside once and the local dogs answered it with a cacophony of barking, safe behind their stockade walls. 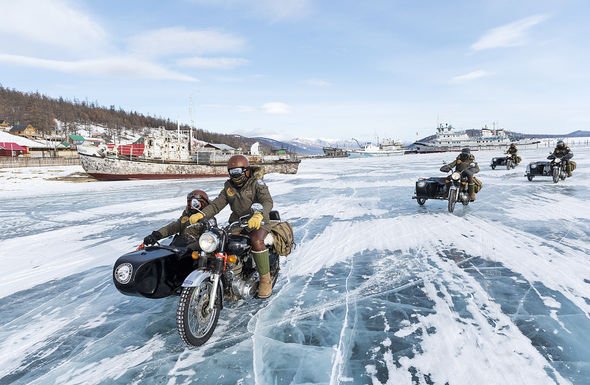 My spirits revived by a hearty breakfast of bread, jam and instant coffee, we took to the ice on the bikes and what a hoot that was.

The bike overtakes the sidecar on accelerating and vice versa on braking, and before long we were all laughing our heads off doing power slides and doughnuts.

Looking down through the ice, was magical; the deep blue of the water below, interwoven with a delicate tracery of white cobwebs, like the vapour trails of a Battle of Britain dogfight frozen in time.

The island we’d planned to camp on for the night was inaccessible, the ice around it churned up like a storm-tossed sea, so we decamped to a collection of lakeside gers normally used by a gold and copper mining company as a summer holiday camp for its workers, complete with pub, restaurant and spa, although they were shut for the winter.

Dinner was chewy mutton dumplings in soup, followed by chewy beef with potatoes and carrots. I began to fear that the chances of Mongolia winning a Michelin star were about the same as Elvis being found on the moon. 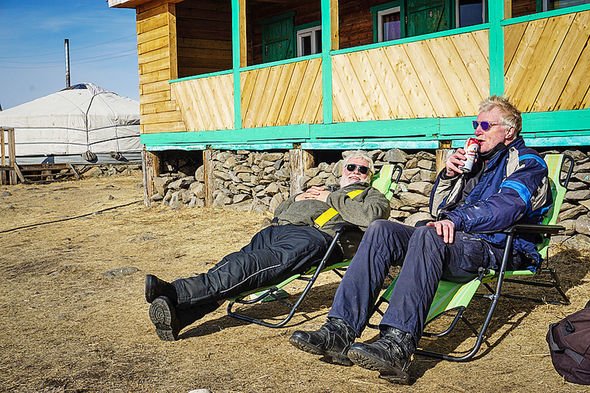 We stoked the stove and went to bed. In the morning it was so cold that we had to use a blowtorch on the Enfield crankcases to thaw the oil enough to start them.

We rode north to the former Soviet holiday camp at Hanh, only 12 miles from the Siberian border. A faded red CCCP sign still stood beside the gate and an ancient UAZ minibus was parked inside, its bug-eyed headlights making it look like the love child of Thomas the Tank Engine and Herbie the Beetle.

Astonishingly, dinner was trout and chips. All over Mongolia, sheep breathed a sigh of relief, said their prayers and went to bed.

The next morning we heard that three cars had fallen through the ice on the west of the lake and their occupants drowned, so we stuck to the east, coming across the racers in the Mongol 100 event one by one. 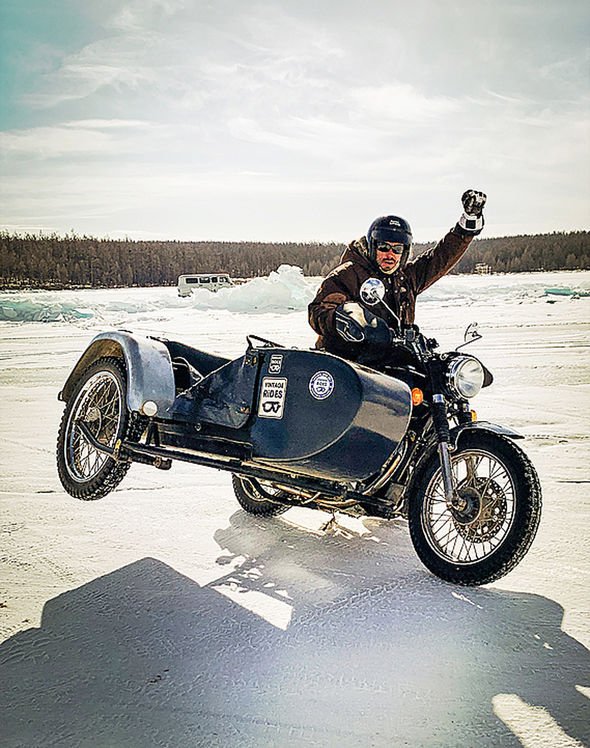 As we were chatting to their support crew, I heard a sudden cry of: “Geoff!” It was Pete the Kiwi, striding across the ice in jeans and brogues. His luggage had been lost at Moscow airport as well.

Back at the miners’ holiday camp, we went for a ride through the woods to meet a family of seven living in a ger, which they moved from pasture to pasture several times a year with their 500 cattle. Inside, the men’s side on the left was hung with saddles, tools, hunting gear and wolf skins, and the women’s side on the right with cooking implements, children’s toys and clothes.

On the wall hung the traditional Mongolian HD TV, powered by a solar panel outside and a window on the world which allowed the family to ask the key questions of the day, like what would happen after Brexit, how we saw Europe’s relationship with Russia developing and the price of a litre of milk. In the hotel back at Ulan Bator, my missing bag was waiting for me. “And about time too. Nice time in Moscow?” I said to it sternly.

“Lovely, thanks. Had a fling with a nice Louis Vuitton handbag, although I suspect she was fake.” “Hope not. If you two have lots of lovely little handbags, I can sell them on eBay, make a fortune, learn Klingon and open a decent restaurant here.” 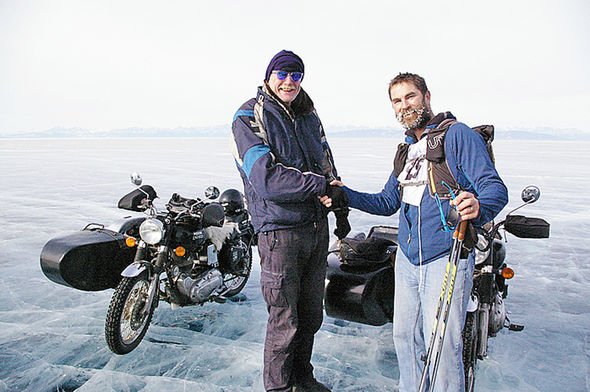 The 10-day Frozen Ride Tour runs twice a year, with six days of riding covering 360 miles over ice and snow. You don’t need a bike licence if you just want to enjoy the view from the sidecar. Prices start at €4,850 (£4,093), not including flights. You’ll need about €60 (£50) for drinks and €50 (£42) for the crew’s bonus at the end of the trip. See: vintagerides.travel/ motorcycle-tour/ mongolia/frozen-ride.

Sparkly tights, obviously. Then everything you possess and a very good sleeping bag.

Why NOW is the time for bagging holiday bargains