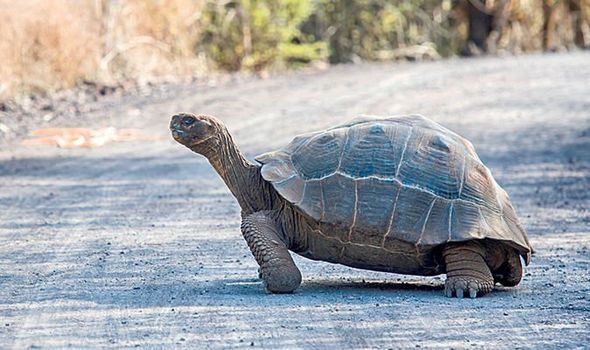 The odd dog, a flock of sheep, a few cows which escaped their field, even a horse being ridden down a country lane which suddenly got spooked and sat, with an expensive crunch, on the car we were in. But this was a first – traffic stopping for a tortoise making a stately progress along the highway. This could be quite a wait…

And this was no ordinary obstacle in a half shell – a giant tortoise can grow up to 6ft long and weigh up to half a ton. But we were delighted – it was the very first we’d seen after arriving in the extraordinary Galapagos Islands.

Just a few minutes later (we very gently drove around it), we were surrounded by dozens of the lumbering reptiles. As we pulled into Rancho El Manzanillo, the look of childlike wonder on my face must have been reminiscent of Sam Neill’s awestruck Dr Alan Grant when he first saw the dinosaurs in Steven Spielberg’s epic – so no wonder the first words from our guide Blanca were “Welcome to Jurassic Park.”

At times it did feel like we’d gone back millions of years, rather than just flown 5,725 miles to Ecuador’s capital Quito, then another 900 miles west to these 13 large – and many smaller – volcanic islands in the Pacific Ocean.

What looked like a pterodactyl in the sky was actually a magnificent silhouette of a frigate bird, which can stay aloft for weeks on end. And while they’re not on the same scale, the beautifully ugly marine iguanas, their spines crested with spikes, are the closest to dinosaurs I have ever seen.

The Galapagos, named after an old Spanish word for tortoise, are where Charles Darwin began to develop his Theory Of Evolution during a visit on the Beagle almost two centuries ago. (He was at sea for five years, all of them seasick). So it’s no surprise the Galapagos are all about the wild creatures, from the finches which got Darwin thinking about natural selection, to the sea lions which laze about everywhere unperturbed by human presence. 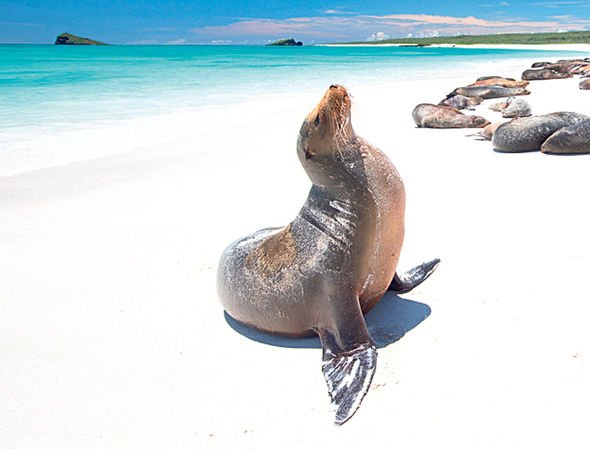 And that’s before you take to the water, with rays, sharks and giant turtles, penguins and blue-footed birds (they explain why “I love boobies” T-shirts are on sale everywhere).

It’s an 11-hour flight from London to Quito, almost 9,850ft up in the Andes, so before we progressed onwards we spent a couple of nights recuperating in the capital at Illa Experience (illaexperiencehotel.com), a five-star boutique hotel in a renovated colonial mansion in the bohemian old town district of San Marcos.

We were welcomed with the chance to make our very own canelazo, an traditional Ecuadorian hot alcoholic drink made from naranjilla, which means “little orange”, cinnamon, star anise, clove water and sugar.

This stunning little hotel has a wonderful view across the city rooftops to theVirgin of Quito, on a hill called El Panecillo which overlooks the city, and one of South America’s best restaurants in Nuema. Here we tucked into an incredible six-course meal which took in modern twists on traditional Ecuadorian dishes including shrimp ceviche tempura, potato soup, and venison with a big-assed ant reduction. Yes, you read that correctly.

I thought it might be our last comfy bed for a while but both the hotels we stayed at in the Galapagos were first class – although with accommodation at a premium and prices too, I guess they should be. Our first island night was spent at Finch Bay Eco Hotel (finchbayhotel.com), a short walk and boat ride from the archipelago’s biggest (population 12,000) town Puerto Ayora on the second-largest island Santa Cruz. 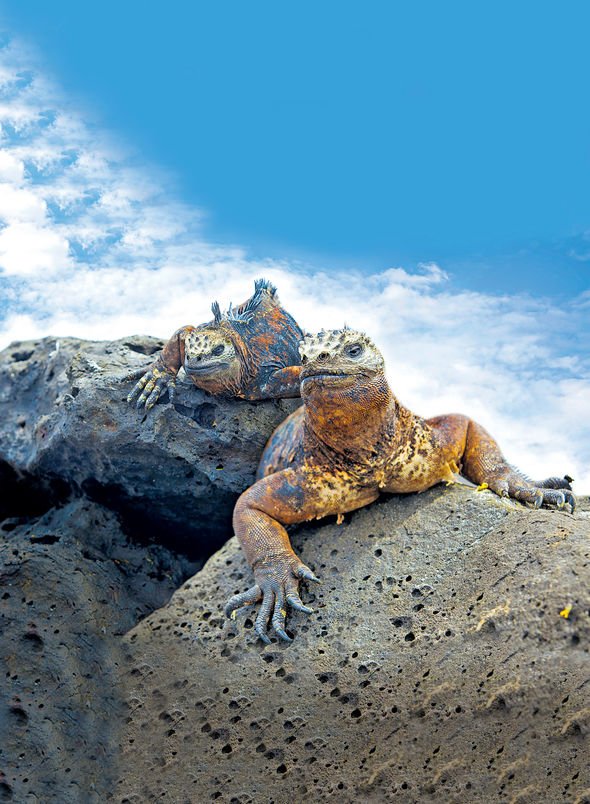 This is where Sir David Attenborough is said to have stayed when he filmed Planet Earth II and those unforgettable scenes of a baby iguana being chased by snakes on nearby Fernandina Island.

Santa Cruz is home to the Charles Darwin Research Station which, for the last 60 years, has worked to preserve the island’s unique wildlife. Talking of preserved, it’s here you’ll find the Galapagos’ most famous tortoise Lonesome George, the last of his kind, who died in 2012.

After George was found on Pinta Island in 1971 many attempts were made to mate him with related species – a $10,000 reward even offered for a suitable mate. But sadly it never worked out before he died, aged over 100 years old.

Since then, taxidermists have done their work and he’s housed in a special climate-controlled building, an important conservation symbol even after death. Our next hotel was on the largest island Isabela – getting there meant heading back to the airport for a half-hour flight in a nine-seater plane which probably isn’t for nervous fliers. Good fun though and there is a ferry as an alternative if necessary.

The adventure level continued to rise on Isabela. After a short drive north up the lower slopes of one of the island’s six volcanoes (five of which are still active), and then a fun stroll through the jungle, we arrived at Scalesia Lodge (scalesialodge.com). 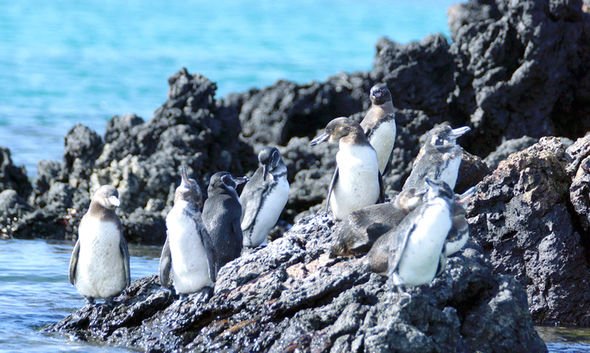 Named after an endemic tree from the daisy family which forests the island, every room is a luxury tent imported from Africa, complete with all the usual hotel amenities, including a fantastic shower.

The next day was an early start for a boat trip along the coast and one of the most stunning snorkelling outings I’ve ever experienced. One warning though, if you sit in one of the back corners of the speeding boat you’re going to get wet before you even put on a wet suit.

But with the warm weather it wasn’t a problem, even with the odd stop to see manta rays, the points of their wings breaking the surface of the sea like shark fins.

After 45 minutes we pulled into a mangrove inlet and donned our gear. Then it was all about the underwater world. The first inhabitant was a giant Pacific green sea turtle grazing on the seabed, as graceful in the water as its tortoise cousins were clumsy on land. Two extra treats – it was joined by a friend (or mate?) and then it swum to the surface breaching for a breath of air and I saw its beak peek just above the water for a second or two.

And then came the sharks – first an 18in black tip reef shark which passed so close to my nose I could see the velvet-like texture of its skin. And then circling a few rocky outcrops were bigger relatives.

Watching a 6ft white tip reef shark cruise along a few feet away provoked multiple reactions at the same time. Shock and awe, with reverence winning out, all the while a primal voice in my head screamed: “SHARK!” So far, so amazing, but – between you and me – there is one creature above all others I have always dreamed of seeing in the wild, penguins. 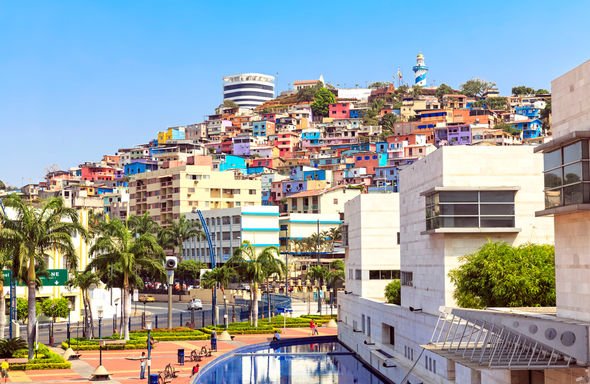 So far I’ve failed miserably. I’ve never been to South Africa or South America, or the right bit of Australia, but here on the equator, of all places, there are penguins, Galapagos penguins.

Most are in such inaccessible places they can only be seen on the big boat tours where people spend a week or fortnight seeing the natural wonders from the water.

We might be lucky on the snorkelling trip I was told. Do you know how hard it is to snorkel with your fingers crossed, let alone your toes in fins? The wishing worked though, for as we headed for rocks further out to sea, there was the unmistakable silhouette of a penguin. A penguin!  Not looking our way, his back to us, but I didn’t care, this was my first wild penguin, a bird I’ve been fascinated by since being given one of those flap-flap-flap push penguins on a stick as a small child.

And as we cruised around the rocks, there were two others, both also on their lonesomes, one lying down and the other kind enough to look our way.

I couldn’t have been happier if I’d seen a dinosaur.

Chimu Adventures offer a 12 day Highlights of Galapagos, Guayaquil and Quito tour from £5,735 per person, based on two sharing a hotel room/safari tent. The package is on B&B in mainland cities and all-inclusive (not alcohol) in Galapagos and includes a selection of daily excursions, snorkelling gear, transfers and internal flights. chimuadventures.com 020 7403 8265 International flights from £825 return from 17 UK airports via Amsterdam. klm.co.uk, 020 7660 0293 Tourist info: ecuador.travel/en

Why now might be the cheapest time to plan a cruise

Airfare is dropping — and you can enjoy the trend through September